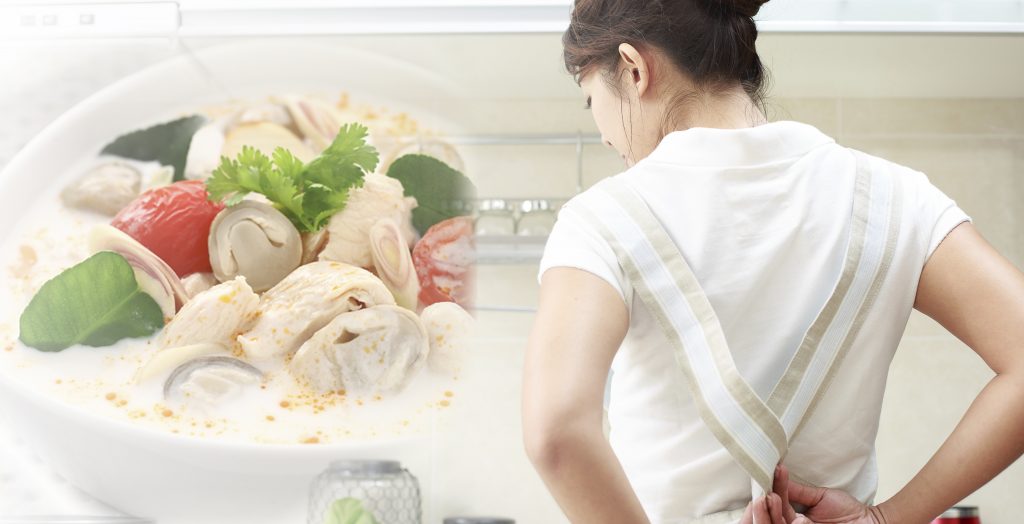 Creamy, savoury and so satisfying – tom kha gai is one of the most popular dishes in Thailand. Named for the galangal root (kha), it also features a creamy coconut-milk broth, mushrooms and savoury chunks of chicken breast. We’re providing you with the recipe so that you can make tom kha gai at home.

* If you’re making this dish in a place where it’s difficult to find fresh coconut, you can use canned coconut milk, though this is likely to be thicker. If desired, you can compensate by diluting the milk with up to equal amounts of water to create a better consistency.

How to Make Tom Kha Gai

Begin by preparing the galangal root. To do this, remove the stems and thinly slice the root. Galangal is relatively tough, so slicing can be a challenge. Next up is the lemongrass. Cut off the very bottom and remove the outer skins, slicing what remains with a diagonal cut to release the aromatic flavour of this herb.

Once you have completed the prep work, it’s time to begin heating up the coconut milk. Start by heating half the total amount of coconut milk over medium heat and adding the galangal and lemongrass. Add the chicken just before the coconut mixture comes to a boil.

Now it’s time to add the chilies, which you can crush with the edge of a chef’s knife and then slice. Removing the seeds will cut down on how spicy the soup is, so that’s an option depending on your preferences. You can also now add the mushrooms and onions.

As the mixture is about to come to a boil, add the tomatoes and turn down the heat if necessary. You can also add the kaffir lime leaves and salt at this point. Stir the mixture for 5 to 10 minutes and wait for the chicken to be fully cooked. As soon as it is, turn off the heat, so as not to overcook the coconut milk.

Now it’s time for the finishing touches. Add the lime juice little by little, tasting the broth intermittently until you’re satisfied with the level of sourness. You’ll also want to salt the mixture to taste. Then your tom kha gai is ready to serve alongside a scoop of fragrant jasmine rice!